Home About Me Podcast Breathwork Work With Me Blog

Ep. 7 When You Don't Feel Supported by Your Partner 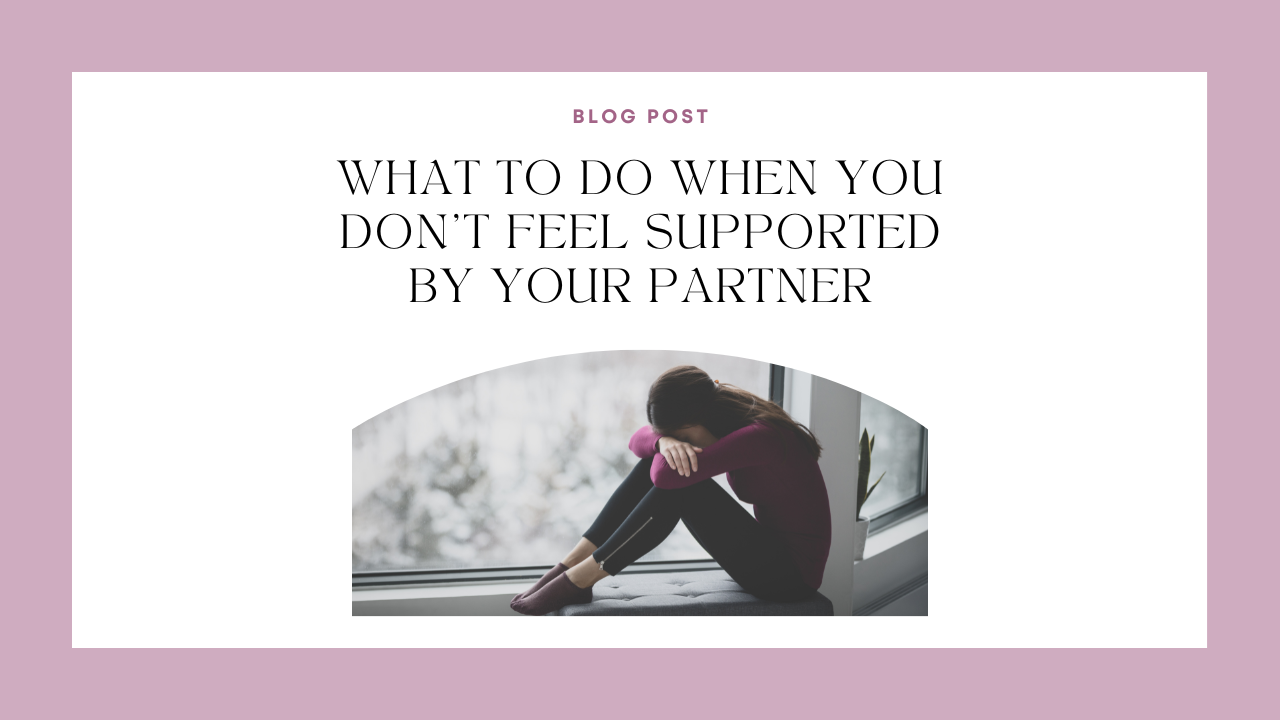 Let's talk about what being a mom is like.

It just comes with so many expectations. From society, from ourselves. We're expected to do all the cooking, cleaning, the child rearing, planning, and still holding a job. Then there's mom guilt. Where we grew up believing that taking care of ourselves was selfish. We've been taught to think of other people first, and ourselves last, if at all. The women before us, the generations before us wore selflessness as if it was a badge of honor. Self-sacrifice is not how I choose to live. I for damn sure, don't want my daughter to live this way either. Not only that, but the woman before us often complained about their husbands and how unhelpful they are. That kind of resentment runs deep, because I'm sure that they also heard that narrative growing up. I'm just curious, I wonder how many generations back that goes. It's almost like, you know, with storytelling, and how that gets passed down from generation to generation and how the stories and the narratives that get passed down really affect how we see life, how we decide to move through life, the decisions that we make, the choices we make the things we go after the things that we avoid our assumptions, our biases. And so I highly doubt that resentment is excluded from that effect that has on us.

It's very possible that you've had that ingrained in your mind growing up.

No one ever helps me. If I'm taking care of everyone who's taking care of me. Back then marriage seemed very one-sided. When you watch those 50 shows like, I Love Lucy, bewitched, and I Dream of Jeannie…the women did everything, and the men went to work, not to say that that doesn't take any effort, but it almost seemed like those roles were not equal. Men had the more important job. And the woman just took care of everything else, and it wasn't as respected. I'm not saying any one job is harder than the other. But taking care of the home and the kids that's a 24/7 kind of job. That's not something that just you can like clock in and clock out from. And so all these phrases are filled with resentment and can have this effect where we automatically look for times when we're helpless.

My narrative when I'm feeling burnt out, I automatically jump into a victim mentality, and I feel unsupported. I get really passive aggressive, if I'm being honest with you, I snap, I knit pick, I pick fights. And it's because I'm not doing well. And so it's almost like that phrase, “Misery loves company.” And what I recently learned about that is that that's actually your nervous system.

I don't normally talk to my husband like that. Where we're actually great communicators with each other most times when we are doing well. But I am not my mom. And my husband is not my dad. Our marriage is not a carbon copy of either of our parent's marriages. In so in times like these, it's really helpful for me to remember who my husband is, who is this guy that I'm married to? This helps me combat the narrative that plays in my head. Very loudly, might I add, right? Because that narrative is so ridiculous.

We're just going to keep looking for evidence that supports how we feel, which is unsupported.

That's literally what happens in my mind. I completely forget all the times that he's been helpful and who he is as a person, which is a very kind human being. And I just latch on to the times when he's not helpful, and how I felt resentful and unsupported. And that basically ends up with me feeling even more upset, but you know, what, there have been times where I've been both unsupportive and supportive, and I would hate for my husband to do the same to me, where he just credits or dismisses what I've done to demonstrate what kind of partner I am the majority of the time, because I made a misstep or because I lacked awareness or because maybe I was stressed out and literally did not have the capacity to support anyone outside of myself.

Why you might not feel supported by your partner can fall under a bunch of reasons. But the two most common ones include number one, they're an asshole. They just don't care. They want you to do everything while they sit on their ass like they're a king and you are their servant. If this is your situation, it's possible that they're really an asshole, and genuinely are not ready to be in a partnership, in which case, you need to start loving yourself more by setting some standards for yourself, and having real conversations with your partner and make decisions based on what they say. Or they're not an asshole and just need to be leveled with because they grew up thinking that pink jobs in blue jobs were normal, and they're just doing what they know. Okay, so that's all number one. Reason number one. Reason number two, which I would say is the majority of the time, what's happening is, that they're not a mind reader. They genuinely do not know what you want from them. And if this is the case, it's a great time for self-assessment. If you think you're asking for support by only saying I need your support, period, end of the story, I hate to break it to you, but it's not saying that you need support is just the beginning of the conversation. But it's definitely not all of it. It's too vague. And it will only lead you to disappointment and resentment.

I want my husband to be able to read my mind in times of need as much as any other woman. But it's ultimately my job to figure out what I want and to share that with him. Trust me, I did not grow up seeing this, seeing that it was the requester's job to figure out what they need it. I learned this very much the hard way that we need to set our partners up for success. We're not dating anymore. So getting mad at your partner for not doing what you need, because you didn't tell them exactly what you needed? Well, I mean, how does it sound to you when I put it that way? It kind of just makes me think of toddlers. Have you ever had a toddler tell you they're hungry? And you're playing this guessing game, but they want to eat right? Only to them, say in your head? Of course, Fuck it. I'm just gonna make pizza. Because they gotta eat right before they get hangry then things get worse. And then they get pissed at you. Because you're supposed to somehow know that they wanted a grilled cheese sandwich even though that was one of the options that you gave them. But they said no. Or maybe they just ignored you. toddlers can be so cruel. But anyway, it's the same thing. You say you want support, and they support you. But it's not how you want it to be supported. So maybe you don't even notice that they did something to support you. Or their support creates more work for you. Or it's just not helpful period. In their minds, they're like, you asked for support, and I supported you What is your deal? And they might even wonder why is she getting so upset? Why is she feeling so ungrateful? I just took time and energy to do this thing because she asked for help. Now she's coming at me.

When we have that reaction, you know what that tells them? It tells them don't bother trying again. Because why would someone want to experience that reaction again, where they just took time out of their day and energy to help you when I'm sure they have plenty of stuff that they want to do, right?

So let's not be like toddlers and communicate clearly. Set your partner up for success. Because when you're clear about what you want, you get what you want, and your partner feels good for helping you feel more supported, you know, at ease loved. So in simpler terms, make it easy for your partner to help you. Being clear helps accomplish that. It just requires a little bit of upfront work on your part. But you're the one needing support. So make it easy. Don't make it hard for people to help you. They won't want to help you. So here are some helpful questions to help you communicate more clearly. Ask yourself, what does being supported? You have this image in your mind of like, okay, this is what I want. And sometimes it doesn't leave our minds. And so if we're not actually verbalizing it, how can we expect our partners to know what success looks like?

What does being supported look like for you? Also, what does having support do for me? What is the impact of their help going to do for you? Thinking about it on this level, helps them prioritize when to do it, how important it is to do it, and understand on a more specific level of “why am I even doing this?” When we know the impact of our actions, or what's being asked of us, it drives us more as it acts as motivation. And it's almost like they become part of helping you accomplish whatever it is that you're accomplishing or helping you feel however you want to feel. Although sometimes it's way more fun to just think that it doesn't get us anywhere, right? It doesn't, it hasn't helped our relationship grow. And it doesn't help us become better communicators.

Communication is such a huge part of relationships, romantic, platonic, and familial.

Working on being able to communicate what it is that you need, makes things go so much smoother. Maybe they just need some clear communication, some clear direction on how to be a great partner for you. Also remember, this is a two-way street. The relationship goes both ways. So consider doing the same for them as well. Maybe they're not on the path of self-awareness and growth like you are and they're not clear on how to communicate what they need. So maybe it's time where you can get curious and help them develop language on how to share whatever it is that they need support with, and then support them.

Communicate clearly, be a partner and then feel supported.

5 Questions To Go From
Conflict To Connection

Sign up to receive your free guide and weekly tips and support to help you create the life and marriage
you deserve and desire!